Spectacles > Opéra > Marina Rebeka: ‘Isn’t art one the most essential of all activities and isn’t art what makes us humans?’
Opéra 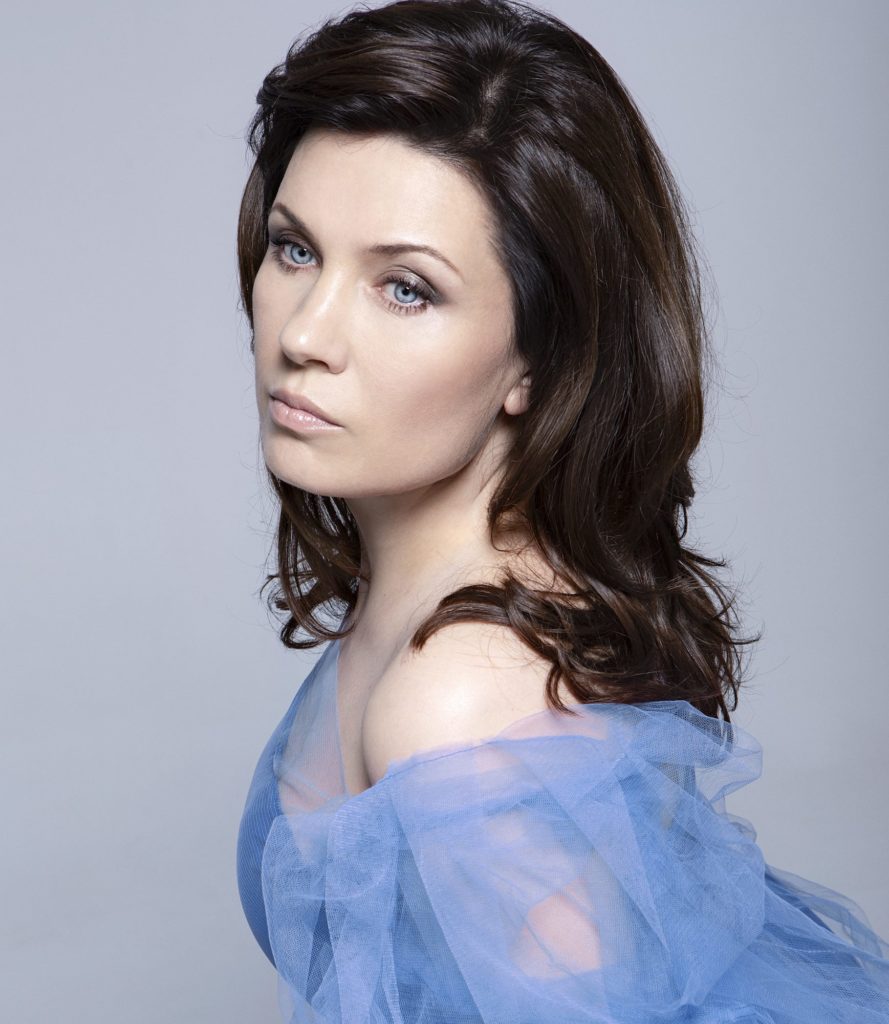 Marina Rebeka: ‘Isn’t art one the most essential of all activities and isn’t art what makes us humans?’

Marina Rebeka is one of the artists who manage to keep working despite of current circumstances. She speaks candidly about the importance of art in our lives, especially in this gloomy period. She has an album of sacred arias in progress and many other projects we hope will come true.

Good morning Marina. You are one of the rare artists who, in this gloomy period, manage to work, and even to go on stage. There was the Traviata series in Madrid in July and in La Scala in September, then the recital, also in La Scala, in the Zurich Opera house and in Toulouse, and you are currently in Florence for the part of Desdemona in Verdi’s Otello. How do you feel as a lyrical artist in such a complicated period?

As a performing artist, this is a terrible time. All theatres are closed to the public and almost every gathering is against the law. Where does this leave us as singers, musicians, actors, technicians, and people who dedicated their whole lives to perform onstage, and through this already extremely difficult profession, provide for our families? Isn’t art one the most essential of all activities and isn’t art what makes us humans? I am sad for all the colleagues and professionals that were left without their jobs.
I feel extremely privileged and honoured to be working during this hard period. After my last performance of Norma on March 11, I was at home for a few months, doing my everyday life and taking care of my daughter’s home-schooling. In June, I received a call from the Teatro Real of Madrid, inviting me to reopen the theatre after pandemic with Verdi’s La Traviata. It was great!
When the whole cast met in Madrid, for the first time wearing masks and keeping the distance, it felt somehow strange, but once the music started all was forgotten and life went on.
It was very hard to portray Violetta in La Traviata in both Teatro Real in Madrid and at La Scala, without being able to touch, caress or embrace my partners, but strangely this fact made the suffering even bigger, and the  despair deeper.
One thing I will never forget is the public in Madrid and in La Scala in the opening night! They were so quiet and so joined with us in everything what was happening. I felt some kind of silent union between us, and such a joy of the final applause!
My recital in Toulouse was the last thing that happened in the theatre before the curfew started. It was an extremely emotional evening. I did many “encores”, willing to fill people with music and joy that they could keep for a long time, because all they had ahead was going to be electronic sound and Internet vision (watching performances on a computer). Nothing can compare to a true performance and live voice!
I thank God every day that I am working actively in this hard time.

“It’s important to focus people’s attention to something else, different than their everyday problems, different from news and loneliness!”

You are rehearsing in Florence; the Premiere of this Otello is getting closer. It will be recorded without an audience, and broadcasted on RAI. Unlike before, the theatres are closed and people have their movements limited. You keep on working despite everything. Do you feel frustrated, knowing that you will be performing in front of empty seats, without the crucial notion of contact with the audience?

It would be much more frustrating to be at home with no work, no singing, no music. We have this unique possibility to keep working and to show our work to many people who are left with no art, no live music, being forced to sit at home isolated, being blocked by their own fears. I find it is important to focus people’s attention to something else, different than their everyday problems, different from news and loneliness.
The Japanese scientist Masaru Emoto Hado has made experiments on water crystals. They change their structure and shape accordingly to the music that they are played. The human body consists of 70% of water. This proves that music has a very strong influence on the human emotional state, and even health. According to those studies the classical music is the one that harmonizes us. Japan, which is such a heavily populated country, has understood that. Therefore, classical music is played in most of 5 stars hotel lobbies and even in big marketplaces, like for example, the Kyoto market. I believe music can heal.

“I believe that fear can also make us sick!”

Rehearsing and playing with Otello‘s team requires proximity to one another. Are you personally afraid of catching Covid?

We make a Covid test every 2 days, and so does every single person who work at the Opera house. As Florence is in the so-called “red zone”, getting out of the house is allowed only with limited purposes and having a certification is obligatory. The city feels abandoned…
I believe that fear can also make us sick! Some people are afraid to breathe fresh air, even if they are alone. I wanted to point out that, although we are required to wear masks when with other people, we should breathe fresh air as much as we can, because it is essential for the health.

How would you describe your approach for the role of Desdemona (in Verdi’s Otello)?

I did not like much this role before getting to study it. Desdemona seemed to be passive, naïve, even stupid. Then digging more and more into the role, I completely changed my mind.
I understood the drama is that there was a perfect love which got killed by suspicions, jealousy and mistrust. So many times, I was asked why Desdemona did not leave Otello after he has dishonoured her in front of everybody in the third act? The answer is: she preferred to be killed by the man she adored,  rather than to live and suffer without him the rest of her life. Also,  staying with him was her last proof of innocence. She had nothing to hide and she believed that her husband would change his mind, even if she suspected it might not be so.
Desdemona is young, wise, witty, charming and brave. She left her homeland, betrayed her nation by marrying a moor and leaving her country. She was Otello’s only sunshine, his best friend, admirer, his wise and loving angel. She has unlimited power over him and she is conscious about it, but she could not imagine that his jealousy would win over his love for her.

At the same time, your album dedicated to sacred songs will be gradually released on different platforms from Monday, November 23 onwards. They are concert arias, some taken from masses, requiems and also operas of Verdi, Handel, Purcell or Mascagni, hits like Schubert’s Ave Maria and lesser known arias. How did you choose these arias? What brings them together despite different eras and origins?

The decision to do this album came actually from the situation we all are living right now. What do people need when they are blocked in their homes, terrified of their future, torn from friends and family? They need faith. They need to believe and that belief will make their burden lighter and help them to  go on.
Sinfonietta Riga called me for another project but instead this album (Credo – Belief) was born.

Overall, the music is very spiritual and even calming. Do you think people particularly need this in these times, a little sweetness of sorts? 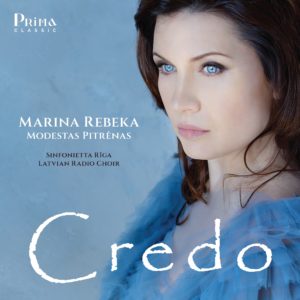 “Since the beginning of times, music accompanies humanity’s life”

There are also melancholic arias that refer to death, especially those taken from Requiems. Over the past year, many people have not been able to say goodbye and mourn their deceased loved ones  in a proper way. Do you find that art plays a fundamental role in dealing with these difficult moments?

Since the beginning of times, music accompanies humanity’s life. When we are children – we hear lullabies, when we are teenagers – we dance to music, while we create our romantic relationships, when we marry we also do it with music. Even when a person dies, the music accompanies him in his last path on this earth.
The music included in this album is spiritual by its message. It includes famous pieces of sacred music, but also some opera arias which have a more ethereal meaning or atmosphere and even a symphonic piece – Albinoni’s adagio, which I arranged for voice and orchestra.
As for interpretation – I did not follow anybody’ s advices or steps, I let the music take me and prayed in my own personal way.

“I am looking forward to coming back to Paris, a city that I deeply adore and in a role of which I dreamed of for a long time!”

Finally, despite all the uncertainty, what are your plans for the future?

Unfortunately, Otello had only one performance, and the rest is planned for the future. I hope very much to be performing in a recital on December 21 in Moscow Conservatory’s big Hall. In January, I should face my most beloved roles – Massenet’s Thaïs in the Monte-Carlo Opera, after which, in February and until the beginning of march, I hope to finally debut my first Leonora in Verdi’s Trovatore at the Paris Opera. After that,  I plan to do the “Credo” album presentation in Riga, Latvia. In May, I am facing one of the most challenging bel canto roles – Anna Bolena in a new production at the Amsterdam Opera house. In June, I will perform in a concert another super challenging role – Imogene in Bellini’s Pirata in Dortmund Klangvokal festival, after which I go to play and sing a free-spirited Nedda in Leoncavallo’s Pagliacci under the sky, at the Arena di Verona. I hope all this will happen and I am especially looking forward to coming back to Paris, a city that I deeply adore and in a role of which I dreamed for a long time! 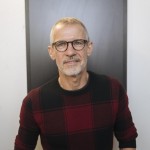