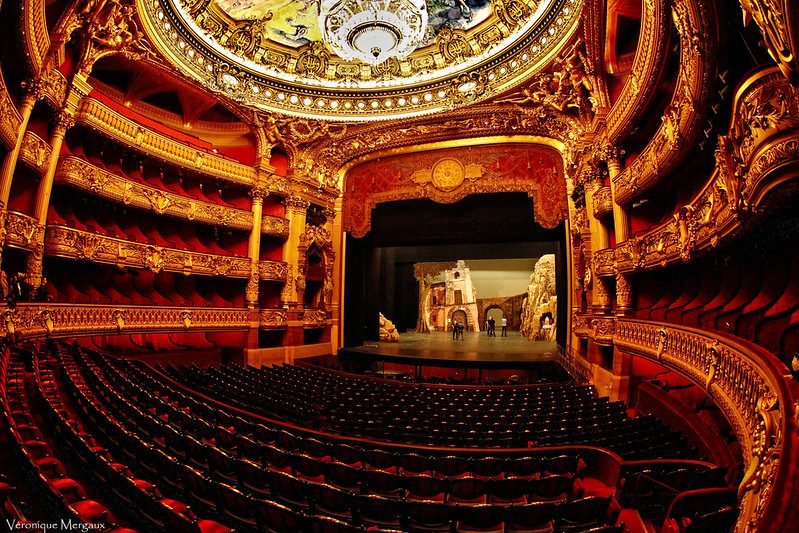 Paris is known for its expansive theater and opera scene. If you do not speak French, you don’t have to miss out on this experience when visiting, as there are scores of shows accessible to English speakers. Many french theaters offer a variety of shows that are performed either completely in English or with English ‘surtitles’ – the theatrical version of subtitles.

This Broadway classic is performed completely in English and can be seen at the recently renovated Théâtre Marigny. The Théâtre Marigny was designed by none other than Charles Garnier, the man behind the lavish Opéra Garnier, meaning that the theater itself is a spectacle. Funny Girl tells the story of Fanny Brice, a young woman living in New York in the early 1900s. Struggling to make a name for herself as an actress and comedian, Fanny takes us through the ups and downs of her life. Here you will encounter the dreams, heartbreak, and wistfulness of Fanny Brice, making it a great show for all ages. Tickets for this sing-along start at 50 € and the program must be purchased separately. The show will last 2.5 hours with one intermission. The next show will take place this Friday evening, February 21st.

Also appropriate for all ages, you can see this show at Théâtre Ranelagh. Performed in French with English surtitles, this classic play tells the tale of Alceste, a man who is too honest for his own good. Molières The Misanthrope was first performed in 1666 and is about a man’s everyday struggle to survive in a world that he believes to be terribly dishonest, yet is he constantly finds himself in the center of conflict and heartache due to his tendency to be overly-straightforward. Tickets for this show start at a price of 27 €. The duration of the performance is a total of 1 hour and 45 minutes. The next available showtime is this Friday, February 21st.

If you are looking for an entertaining experience for the entire family, then look no further than Frou-Frou The Musical. This musical is performed in French with English surtitles at Théâtre Édouard VII. For a premium viewing experience, you have the option of purchasing smart glasses. The humorous play is set in Frou-Frou Les Bains, a hot spring-spa, during the 1920s. Just as coveted guests are about to arrive, the spa owners run into a problem – they have run out of water. Frou-Frou The Musical features silly plot twists and romantic chaos, ensuring that you won’t be bored. Affordable for the whole family, ticket prices start at 27 € for this show which lasts for 1 hour and 40 minutes. The next showing is this Saturday, February 22nd.

Dying to see an opera performance at the extravagant Opéra Garnier, but afraid you’ll have no idea what is going on? Lucky for you, Opéra Palais Garnier features shows with English subtitles. Yvonne, Princesse de Bourgogne is a darkly comedic opera about the less-than-regal existence of Princess Yvonne. Be aware that when buying tickets for the Opera, it is important to pay attention to the layout of the auditorium, as some areas give a better view of the stage than others. Make sure to arrive early to give yourself time to wander around the building’s main foyer, ornate socializing rooms, and grand staircase. This opera spans 2 hours and 35 minutes with one intermission. Ticket prices start at 149 €. The next performance will take place on February 26th.

Presented by Théâtre Fontaine, Sky’s The Limit is a comedy about how the Eiffel Tower came to be. This play tells the story of two young gentlemen credited with designing a groundbreaking monument. However, it was not seen as groundbreaking by all at first. Performed in French with English subtitles, you can see how these two men manage to convince Gustave Eiffel to take on the world-renowned project. See this 1-hour 10-minute show for as little as 19 € as soon as this Friday, February 21st.

Ionesco Package: The Bald Soprano & The Lesson showing until July

If you are trying to pack in as much as possible during your stay, then check out the Ionesco Package. Taking place at the intimate venue of the Théâtre de la Huchette, you will have the opportunity of seeing two classical theatrical performances in French with the addition of English subtitles. The first of the two plays by Eugène Ionesco, The Bald Soprano, tells the story of two couples during the 1950s. The second, The Lesson, is a performance about an unanticipated interaction between an old teacher and a student. The total length is 2 hours, with a brief intermission between the two performances. Tickets for this package start at 38 €, a great value to see two shows in one evening. The next showing will take place on February 26th.

Visit here for more information about the mentioned performances and tickets.