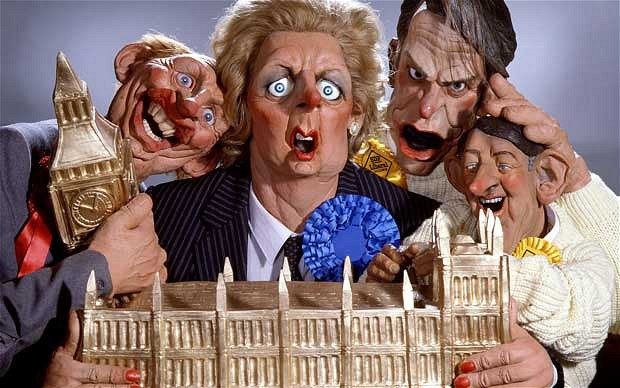 « You can’t be serious! », 5 satires to watch before the British General Election

The British take their politics seriously but rarely their politicians. In fact, if you can’t take ridicule or outright abuse you may as well pick up your toys and go home – as David Cameron discovered on a recent election walkabout where he was serenaded by a jolly man with a ukulele singing “F*** off back to Eton with all your Eton pals” (Eton being the exclusive private school where many future leaders are grown). So on the eve of the General Election, here are five landmarks of recent non-ukulele British political satire.

In the last 40 years, British satire most fully flourished during the era of Margaret Thatcher. The extremity of her personality – and some of those around her – plus the stark contrasts between parties, was manna from heaven for satirists. And thus it was that created by Fluck & Law, was born, where politicians were ruthlessly lampooned in rubber puppet form. The combative, polarised nature of parliamentary politics at that time is well captured in this clip:

Mrs Thatcher claimed that her favourite television programmes was Yes Minister, a witty examination of the relationship between the bureaucrats of Whitehall and their political ‘masters’, locked in a constant battle to prevent politicians and their new ideas upsetting the status quo. The frank cynicism and old-school charm of the governement secretary, Sir Humphrey, used in manipulating hapless new minister, Jim Hacker, are well displayed in this brief clip where he explains what the European Union really is – many in British politics would probably still nod their heads in agreement:

But others sensed a darkness at the heart of power in those years and in 1990 came an almost Shakespearean drama which captured the new ruthlessness. Francis Urqhart made us gasp even as he made us laugh at his good manners and bad morals. You may be more familiar with its recent US incarnation, but this was the original House of Cards. Here he has just won the leadership of the party and is having a quiet word with us:

However, Tony Blair ushered in a new era of middle-ground politics, orchestrated through endless media ‘spin’ (manipulation of journalists). The makers of Spitting Image called a halt to the series, citing as the principal cause the fact that the new wave of politicians were too dull and too similar to effectively caricature. Satire had been crushed by boredom, it seemed. But then one of the most creative minds in British comedy – Armando Iannucci – stepped forward with a tiny-budgeted, tightly-written programme that gradually grew and grew, defining this new category of politicians without convictions, who created a Battle of the Blands where only popularity was important. It was called “The Thick of It” and the foul-mouthed media manager Malcolm Tucker became a new byword in both cynicism and creative swearing.

The final episodes were perhaps the most devastating critique yet of the vapidity of contemporary party politics, but a great achievement was also the spin-off film In The Loop which tackled head on the question of how Britain got dragged into the insanity of the Iraq War – without once mentioning Iraq – as the “Special Relationship” with the USA was laid bare:

But what of THIS election? What is there to satirise? The only interesting players are the rabidly anti-Europe (and all foreigners) UK Independence Party (who would be 1000% with Sir Humphrey), led by Nigel Farage – a man who is already the kind of character Peter Sellers might have played in a 1950s British movie – and at the other extreme is Russell Brand, a narcissistic former comedian and sex addict turned messiah/revolutionary who, having previously told people not to vote just told everybody to vote Labour (unless they live in Brighton).
Aside from that, it’s the same old big party faces from last time. So what to do? Well, perhaps what Cassette Boy does – put the words the politicians are really thinking into their mouths through some nifty editing. It’s not sophisticated, but it is a lot of work and very cleverly done. I defy you not to laugh at the David Cameron Conference Rap God knows we need a laugh.