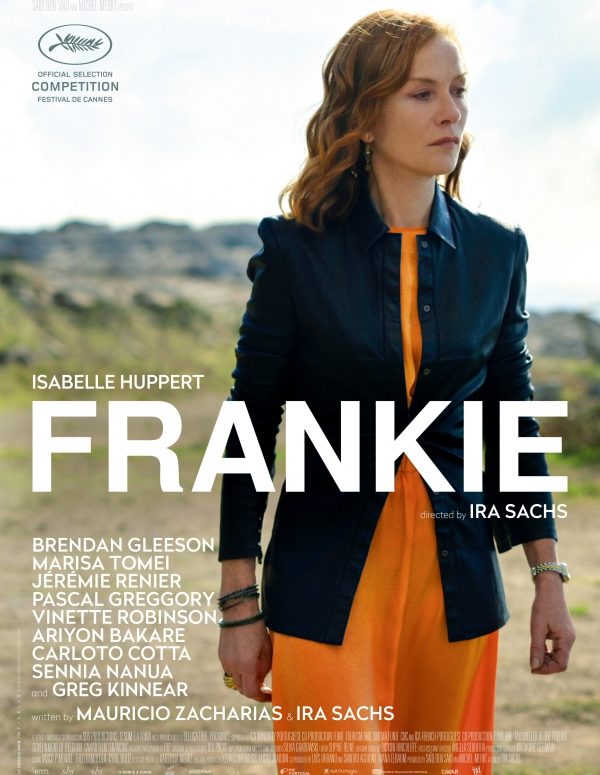 As we loved Strange Love and Brooklyn English so much, we had the huge opportunity to meet Ira Sachs in Cannes in 2019 to talk about his latest movie, Frankie. The movie is now available on Canal +.

Because of the two previous features I’ve seen, I expected you to be from New York. How did you open up to something else?

I started making films in Memphis, Tennessee, which is where I grew up.  For me, it was really the story that led me to Portugal. I had the idea for a long time to make a film about a family on vacation because I had this experience. And often, what I found is that when people are away from their home, they’re deeply connected to themselves and to each other because they don’t have the kind of daily rituals which give them space not to be intimate. Sometimes when you travel with people, you are stuck. You are just with them, with them, with them… So my co-writer was from Portugal and we ended up picking him up in Sintra and I spent a lot of time there. So by the time I shot there, I felt like I wasn’t Portuguese, but I knew Sintra very well, so we wrote the script for that town and that region.

Well, there is a kind of theatrical quality to the film in which it’s like a cast of characters who are brought together, ultimately, in a final scene, there all together and for the curtain call at once. But I think, you know, to me, there was this quality in which they were (fighting?)… The film begins in the everyday town of Sintra, then it goes to the middle and it’s in the forest, and then things change. Things happen in the forest, and I think that’s an allusion to the kind of storytelling of magic and, in a way, the magic of the forest. And then there is the top of the hill, which is the third chapter of the film, which is about the landscape really. So, I guess it’s sort of how I experience family. It’s also very much how I have experienced being close to illness and death which is that it is something that you can interact with intimately, but it also brings you to a place that is very alone.

The teenage girl goes all the way down to the sea…

She goes out, I wouldn’t say she goes down. She’s the one person who leaves the village in the film and I think she is the one who is trying to figure out what life is like for herself, outside of this family, which is what we all do when we are creating independence for the first time. I was in Sintra when I was 14 with my mother and my two sisters on a family vacation. I didn’t do the same thing that this girl did, but I remember that age as being one in which I was first a part of something and also trying to test what it was like to be outside.

You talk about theatrical qualities; it is also a tragedy. You have the unity of time, of action, and of place.  It’s in the french way, like Racine…

And Chekhov! That’s correct and I think, I like Chekhov, which is hard to quote without being too pretentious… But I think you also play with comedy. When you play with tragedy, you play with comedy. I would say I was always interested in thinking about his character as a duality. So there is that for Gran Canaries character, who is a bit of a satirical character. And yet in the film, there’s a ??? (4’20) which people identify with his pain almost more than anyone else, you know. There is a way that he builds empathy, which is the surprise. Or you have the character of Brendan Gleeson, who is throughout the film, always to the point of crying and then that disappears. So, there are these ways in which the playing out of comic stories, comic characters in the course of the movie has kind of balanced the comic tragedy.

About the scenography, the costumes were a part of the landscape. Can you explain a little more about that?

The camera is very struggling to frame the scene, to keep the character inside the frame of the camera, especially Isabelle Huppert.

Well, I think I was creating a kind of bizarre scening, mise en scène, in which the characters are never isolated from the shape of nature around them. I think there’s also a lot of walking and talking, so the question is, in a way, about distance. Characters are often coming from where there is a wide shot, where you see two of them existing and they’re coming into a close-up or medium shot. And I think, unlike in most films where that’s done by cutting, in this film it is done by choreography, right? So you never cut for emotional emphasis, you only shift on size based on movement. And I think what that does is it draws the attention of the audience to the performance, which I think is a pleasure. That’s the theatrical pleasure of the cinema. So you’re watching, for example, Frankie, but you’re also watching Isabelle Huppert. You are watching them simultaneously so that you see them almost as mirrors of each other in a moment. And as an audience member, you are relishing that performance… To me, the film is a lot about the pleasures of life, so that includes music and color. It includes nature, includes beauty, and that includes acting, right? And food but acting, too, is a pleasure.

The melody of the piano, what role does it play?

It’s a Chabert piece and it’s it repeated throughout the film and it, in a way, becomes Frankie’s theme. It is something that she has done. It’s a private conversation she has in her mind with a tune and with a particular melody which becomes very sort of connected to her. I also think at the end of the film when you hear the whole piece moving, to me, that is simply its beauty. In the sense that one of the things, you lose and death is something you lose, right? (?). It’s gone. So, I think to kind of force the audience to pay attention to a tune is, in a way, to ask them to pay attention to what is special about life.

Some of your characters live in England, some in the U.S., some are Protestant, and some of them are French where they are Catholics. And then, you are in Portugal which is a Catholic country. What is the part of religion and the difference between religion and faiths for this last trip?

Yeah well, I think it’s, to me, a relationship between God and no God, and the different ways in which people face the unknowable. And in a way, you can say there’s, this is a very interesting question, by the way, no one asks me this; there is the question of a variety of experiences. Like, the six of us in this room have a different relationship to both God and to love, right? And I think the film, in a way, gives the opportunity for us to put those right against each other. And not to prioritize any one, but sort of to draw attention to what is universal and what is individual. So, I think the seven of us arrived at this moment in each other’s stories. They brought us to this moment in the day. And I can make a film about this scene right here. This could be the last scene of the movie. Right here. And I think that, for me, was always interesting: How to be democratic, so that you’re looking at everyone with a certain kind of compassion. There is a quote from the 13th-century Jewish philosopher, Philo of Alexandria. He said, « Be kind. For, everyone you meet is fighting a great battle, » and for me, the role of the director is to understand that battle as best I can.

Can you say a few words about your cast?

Sure!  I mean, you know, for me, I try to think of what set of actors and what sort of people make sense together, and some of it is about where they come from. But it also has to do with acting styles and, particularly, I’ve been wanting to work with Brendan Gleeson for 15 years. We had seen him in a movie and I’ve always thought that it’s exactly the kind of acting style that I love. I think it’s very similar to the ways of performance of Isabel, so I can imagine them marrying in performance as well as a character, if that makes sense. I think it’s about the tone you try to think of. And for me, what I’m looking for is actors who aren’t transforming but are being.