Cinema > A l'affiche > [Compétition] « Sicario » by Denis Villeneuve : an allegory of the power of Paper
A l'affiche 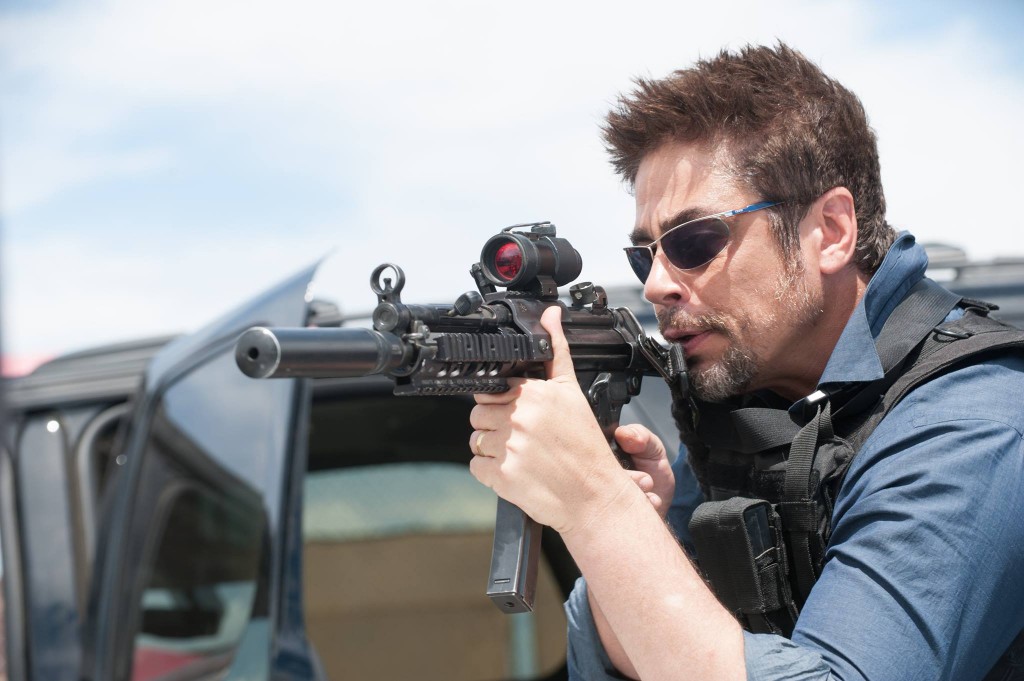 [Compétition] « Sicario » by Denis Villeneuve : an allegory of the power of Paper

The reception for Canadian Denis Vileneuve’s Cannes contribution Sicario has been mixed. Some see a Hollywood thriller with added style and cool, others see a turkey dressed as an eagle. But a pair of TLC critics see something altogether different…

This may sound like a radically odd thing to say about a movie purporting to be an action thriller, but a thorough inter textual analysis of Denis Vileneuve’s crashing Cannes contender “Sicario” reveals it to be a parable about paper-pushing.
Vileneuve, who is known for his application of a signature style to independent genre films such as 2013’s Enemy and the utterly remarkable Incendies (2010), has been put at the helm of a Hollywood behemoth. He has, let it be said, carried off the task assigned to him with considerable verve. Yet beneath Sicario’s glittering surface lies a mundane, even improbable curio inhabited by the sort of people who continuously insist that Emily Blunt isn’t pretty without make-up (although she evidently is) whilst Benicio del Toro’s existentially wounded prosecutor turned hitman shambles about like a man preparing for a particularly grueling encounter with his accountant.

Kinder critics have celebrated the way that the Coen Brother’s longtime cinematographer, Roger Deakins, has transformed the simple act of Alpha male strutting with weapons in hand into something vaguely avant -garde (the gruesome rows of charred corpses in the opening set piece and the excellent convoy scenes are indeed fairly original by Hollywood standards). Yet while these perspectives are somewhat valid, they are ultimately superficial interpretations that miss the film’s deeper message. That message is that of the supreme and all encompassing importance of bureaucratic legalism in the midst of perpetrating an illegal dirty war on foreign territory.

WARNING: SPOILERS AHEAD (or alternatively: a life raft that will save the viewer two hours of precious life force with which one can do something useful).

The film proffers clues to its actuarial ideology and denouement in an early recruitment scene where a group of what are supposed to be mysterious intelligence service operatives sit around resembling Health & Safety Executives, embalmed in a glass office. Chief amongst them is Josh Brolin, a ‘renegade’ CIA agent who expresses his desire to bring massive, aggressive disruption to the Mexican cartels by wearing flip flops in an office which is clearly heavily air-conditioned. He wants Emily Blunt on his team, but his choice of her remains in question for most of the film? “Why?” asks Ms Blunt’s suspicious FBI partner. “Why?” she asks Brolin in turn. “Why?” we viewers wearily ask each other.

After deliberately not explaining anything to anyone for an incredibly long time, Flipflop Man Brolin finally reveals the secret in the midst of a crucial shooting scene. Blunt’s character needs to be present when Delta Team operators enter a tunnel into Mexico on the American side. These sorts of interdepartmental cross-border operations are obliged to do so by Congress, as the CIA is not allowed to operate on American soil and so requires an FBI agent to be present alongside the CIA while they flout US and international law with impunity. Yes dear reader, Blunt’s character is merely taken along to fulfill a bureaucratic technicality. The CIA, Delta Force and Columbian Drug cartel hitmen do not require her to do anything, only to be around at the end of firefights to sign off on paperwork after they have broken all the rules and gone in guns blazing to terrorize the cartels.
Predictably, our ‘lawful-good’ type-persona heroine refuses to submit meekly to such moral compromises and sees things she should not see along the way. Gender role reinforcing friction between Blunt and Brolin ensues, during which she punches him in the face for being the aggressively unrepentant jerk that he never claimed not to have been.

At this point the film mysteriously leaves the protagonist and follows the mysteriously uninteresting character played by del Toro out of the tunnel. He is on his mission to avenge the cold-blooded execution of his wife and child with his own cold-blooded execution of somebody’s wife and child – and then the Mexican drug kingpin/ father in turn. This strange lurch into a different story direction is never adequately explained. Then del Toro, who had previously seemed quite sweet on the allegedly repellent Ms Blunt, appears in her apartment and puts a gun to her head because…. wait for it… he needs her to sign a form declaring that correct procedure was followed in liquidating the Mexican drug pushers. Now some might question why some shifty mercenary, associated with Colombian drug cartels, who has now gotten the revenge he has sought for many lonely years, should be so concerned with correct administrative procedure. Why is it not Brolin’s CIA agent, who actually might plausibly be concerned with such matters?

But it is here in this scene that Villeneuve reveals his true purpose, his deeper message. The issue with the war on drugs is not that when you decapitate one cartel a new head will appear in its place. No, the problem is that carelessness with with papaerwork costs lives, and until the security services properly train hired killers in the importance of a clear tick-box system of reporting, with adequate legal oversight, then no amount of renegade missions will ever beat the cartels. And that is a truly sobering thought.

To read our french critic of the film, click here.