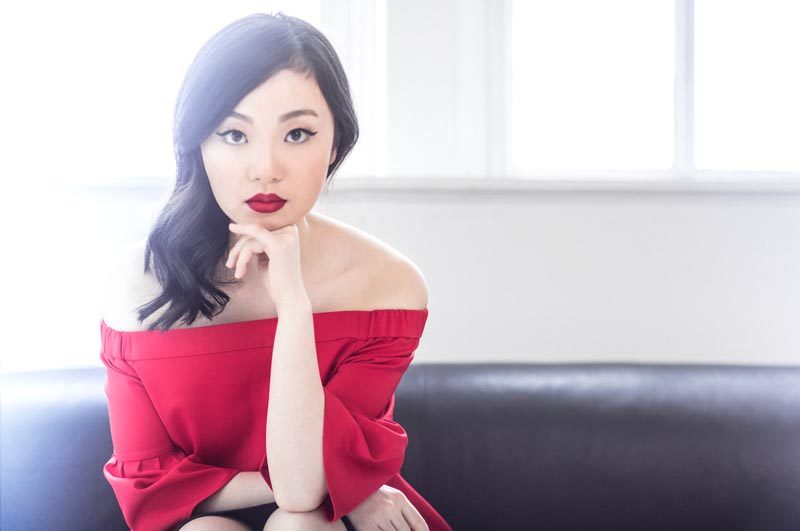 Yin Fang is a principal soprano of the Metropolitan Opera, of the Metropolitan Opera. This season 2019-2020, she is to sing Pamina in the Magic Flute and Sophie in Werther in New-York, she will also be Zerlina in Don Giovanni at the Lyric Opera of Chicago. Born in Ningbo, China, Ying studied at the Shanghai Conservatory of Music and won the Golden Bell Award at the Guangdong Singing Competition in China in 2009, before moving to the USA to study at Julliard. In France, we could se her in 2017 at Opera the Lille with Emmanuelle Haim in Haendel’s Il Trionfo del Tempo. We met her after a wonderful recital in Jurmala, that she performed at the first edition of the Riga Jurmala Festival. Portrait of a charismatic and passionate diva.

Your first appearance at the Met was in a park and already a recital … How do you like perform in this format ?

Yes, it was in the summer, but my débuts at the Met actually were in 2014, in the Shostakovich’s Nose and that was very special, I mean it’s a beautiful part and at the same time it is very funny. The Recital is a part of the training. At Julliard, we did lots of recitals and sung in different language. I just love these pieces, the music so beautiful, they really speak to me, in a way that I want to express.

Your face is very expressive on stage, how do you work on your acting?

I don’t really think about it, I can go with the feeling, most of the time. Sometimes the feeling is so urgent that I have to act a certain way. It’s a natural thing, I don’t plan anything. It is like a reflection of what I am feeling at that time.

Do you have a special feeling when you’re singing in Russian?

I really did work on it with someone who speaks Russian. And I hope the audience could understand what I am singing. It’s always extra nerves when you’re speaking something at the place when you speak his language. But use what you do, don’t thing about it.

There is a great complicity with the pianist, Ken Noda …

He is a really great coach. I met him at the Opera. He really taught me a lot of things, and for me he is a presence, an artist. The program we organize and perform together is really something special.

If I understood well, Mozart is very present these days in your life, with the parts of Pamina and Zerlina…

I love singing Mozart, I think it really fits my voice. And the characters are not simple, they are deep and complex and it’s quite challenging to have so many dimensions, because the music is so beautiful and divine. It is really something to explore that, to be that person o stage.

We always start from with the music, of course. I study the role, play it on the piano, write the pronunciation, read, learn and the last thing is the singing. So there is all the preparation at the beginning and then the voice at last. Of course, I do background researches : who is this character, where is she from, what does she do, what is her social status ? But it is important to keep an open mind, because when you work with the director and the conductor, they have sometimes very specific ideas about how that role should be. So you have to do the work, the fundamental work, feel comfortable in that character, give her some ideas of what kind of person she is — or he is too (I performed two boys roles!) And also feel comfortable when singing the part. To be prepared gives you the flexibility to do it in many different ways.

During the recital, you performed some beautiful Chinese arias. Are you going to do Chinese repertoire ?
I would. The composer I chose tonight is a living composer, he is from the south-eastern part of China, from a towns based on water, where there are a lot of bridges, and this song is about the bridges connecting the town and people. Everything reminds me of my own town as well, it’s from the southeast of China, there are rivers and tiny bridges in my own town too. And I think it is a beautiful message: music is actually the bridge that connects different people who don’t speak the same language, who aren’t from the same background, the same culture, but when we hear beautiful music, we have the same feeling.

How did you come to opera? When did you decided you want to be an opera singer ?
It’s a very simple story. I loved to sing when I was a kid, and it was very easy for me to pick up a tune that I heard on TV or the radio. I could sing very quickly. So my parents decided to send me to music school. I started with the piano, but I hated to practice, and I loved singing very much. So my parents sent me to a voice teacher. I was 12 and she told me that I had a voice to sing classical music. But at that time, I didn’t know much about classical music, and I loved folk singing in China. Fold singing is a huge thing, singers are superstars, and I wanted to sing folk songs. But today I really thank my voice teacher for sending me the right way. Then I went to a music high school in Shanghai : it is a very prestigious high school. I didn’t thing that I could get in, because the competition was very big; they were hundreds and thousands of applicants from all of the China, and they only took five singers that year. I didn’t expect anything, and I was one of the five. I had a three hours train way to go to Shanghai, it was my first time leaving home, as I was 15, in 2002. It was very hard to be far from home, but the environment in the school was great. I started to discover more repertoire of classical singings, the songs, the leaders… orchestra pieces. We were exposed to a lot of music. And I totally fell in love. I wanted to sing all these beautiful pieces of music.

And then you won a prestigious price in China?
Yes, a competition, it also came as a surprise. I always thank that competition is a luck, and it doesn’t completely represent who you are as an artist. It’s like Olympics : you just show the strongest things you have, and maybe you won’t singing things you have done. It’s very different from artistic choices in a career. And competition is based a lot on luck. The head of Opera department of my school persuaded me to apply and so I did! without any expectations, I just went here and had fun singing all those pieces, and I won. I was very surprised.

You did a special study program at the Metropolitan Opera ?
It was very helpful. At school, teachers protect you. The three years preparation is really aiming at preparing performance until you enter the MET. You work and perform with some of the best singers and directors, and as a young artist you see them, you see how they think, argue, manage different things, art, music and dramatic ideas, together. It is really fascinating. In the program I created very deep connections with Ken Nagano and several conductors, and also many wonderful colleagues.

Did you know when you wanted to sing as a kid, that it would come with so many travelling, and changing places every 3 months, and did you survive that? You like that?
It’s not easy, but I always see things on the positive side. A lot of people want to travel around the world, and I am travelling and working at the same time, I am seeing the world, and on top of that I am working and I love my work, singing. So of course, it’s very tiring, 3 months, years, and then 2 months here, but I am happy. I also really need to take care of myself, mentally and physically, I think it’s very important to be happy, doing what you do. I thing music is a sparkle of happiness, it should be. And my parents are very supportive and keep the contact. We talk a lot over the phone and on facetime.

Are you really well known in China?
I don’t know, because I left after I won the competition, which really brought a lot of attention. It has been ten years and I have never really been back in China to sing. But something will happen, I am sure. It’s incredible how the music industry and classical music grow in China… We have many new theaters, good operas and very good orchestras as well. So yeah, when the rime is right and things are working well, I am definitely looking forward to going back to China.

How do you manage your social networks? Do you have your agent do that, or is it important to work yourself on it?
It’s a big thing. I don’t really do a lot. I have a facebook page, and I have an Instagram that was private, but became public. It’s just some special moments or good memories I publish nothing promotional. It is both personal and public at the same time. I also need to update my website, where people should come to check the news and the dates of the performances.