Musique > EN[Interview]: Jacob BANKS, « Me as a black guy, if I’m being racially stereotyped, I’m not allowed to fight back »
Musique 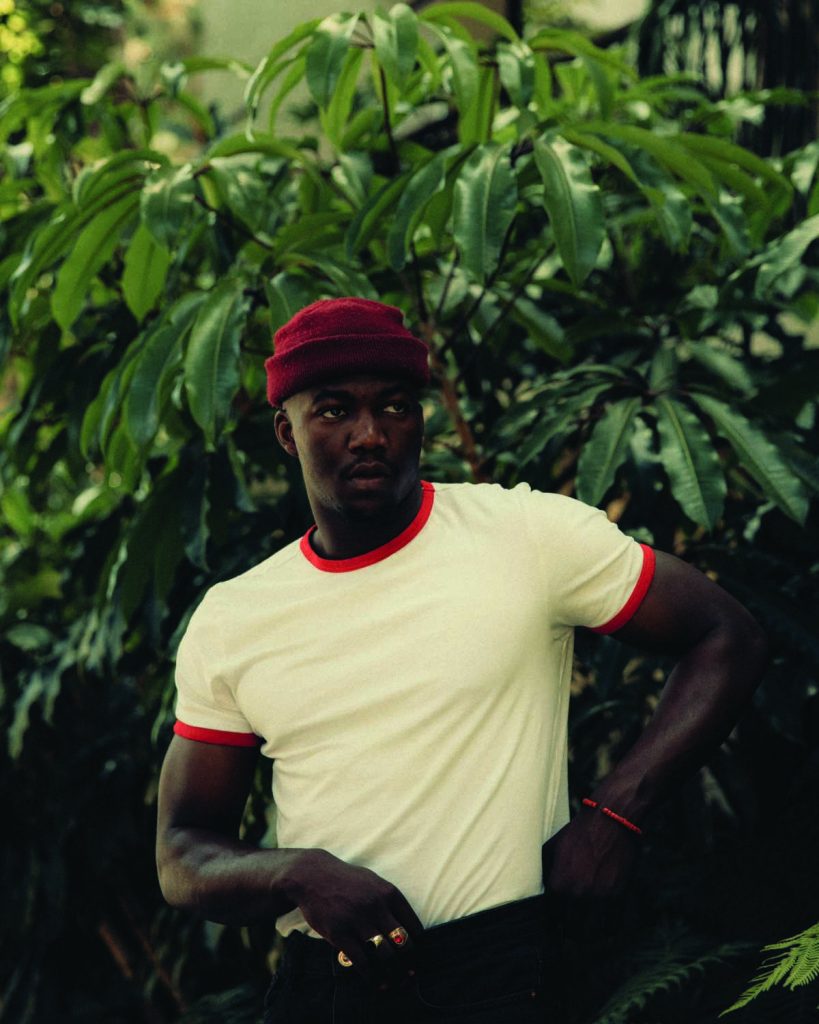 EN[Interview]: Jacob BANKS, « Me as a black guy, if I’m being racially stereotyped, I’m not allowed to fight back »

Between the studio and the rehearsals of his first world tour, Jacob Banks stopped by Paris to perform for the first time in an intimate showcase. At 24, he is one of the rising starts according to prestigious newspapers like Billboard or Fader. At the crossroad of modernism and old-fashioned soul, the young British singer came back with a brand new enchanting EP, The Boy who cried Freedom. Let’s meet this young talent with a hypnotizing voice.

D: I tried to find some elements on your life and I’ve had found barely nothing. Is it a strategy of yours to keep it secret?

J: I put it all in music really. Plus I’m a grandad, there’s not so much to know. Like I have two cats that I love — I’m severely allergic to both of them but I’m having them for three years now. I have friends that i love dearly, and yes. I’m very simple. I don’t really do anything else. That’s maybe why there’s not so much about me out there, I’m not really interesting.

D: One of the few elements that I’ve found, is that you were born in Nigeria. And then you moved to Birmingham. How old were you at the time? And how was this experience of going to a whole new country?

J: I was thirteen when I moved to the U.K. It was just different. It was such a cultural shock for me in the sens of like, the struggles of growing up in Nigeria and the struggles of growing up in the U.K. are pole opposite. For example, when I grew up in Nigeria, we wouldn’t have for 24 hours electricity, that was the struggle. The struggle in the U.K. was completely different. People were fighting to get more money then they already have. Growing up in Nigeria teaches you what to appreciate. Living in the U.K. teaches you what to aspire for. It makes you feel like you can achieve anything and in Nigeria, there’s not much you can do because of the mentality, it’s very much like ‘just get by’ and in the U.K it’s very much like ‘let’s get more’.

D: Did you draw inspiration from this experience in Nigeria?

J: Yeah. In my music you can hear, like in Monster, african influence. My first single from my album, Loving Enough, has a lot of tribal sounds. I draw a lot from all this experience.

D: Billboard said about you: « He can save soul music and introduce it to a new generation ». That’s a huge mission on your shoulders!

J: Wow. I’m not Captain America boy. I don’t know, I’m just literally here to make music for my friends. It’s all I’m doing. My whole concept of music is if I make music that I love, there’s a good chance I’ll be performing to people who could be my friends. The whole « saving music industry »  that’s not on my back. If they want to put this, that’s cool…

J: Yes but for me, that’s more — that’s my taste though. Like I love Sam Cooke but I love Drake, Kanye West and James Blake. I don’t want to have to choose. I don’t want to only share the half of what I like. I want to share with them everything I like which is soul music but I’m still 25.

D: Your previous EPs were called The Monologue and The Paradox. And now you released a few time ago, The Boy who cried Freedom. Is there a narrative between all your EPs?

J: A monologue is a speech by one person. So The Monologue is about me presenting myself to the world, in the sens of being an artist for the first time and telling my heart out, proper selling myself to the world. A paradox is a blend of two things that shouldn’t work together but it does: I’m a young guy but I have an old school voice. So I’m going to experiment with this. And The Boy who cried Freedom is now taking that experiment and using it to stand for something. Using what I love, to represent the people who are oppressed. Using this stage and this mic that I have to speak on behalf of people who are fighting for the most basic rights in the world. So yes, i guess there’s a narrative.

D: Why such a name for this EP? This one sounds way darker than the previous ones…

J: Yes, clearly! It’s what the world was at. When I think of stuff like Black Live Matter, and it’s literally people saying « Please don’t kill us », it’s very basic, it’s not a big ask. Everybody should be ok with that. But somehow it doesn’t translate. So, I think that’s where the whole thing came from. It’s just seeing oppressions in the world, like islamophobia and demonstrations against same sex marriage, I just felt the world was in a dark place and as an artist, I’m a social commentator. I report to the world what’s happening and tell people what I stand for and I wanted to speak for people who are oppressed and me myself I’m being oppressed in many ways. It’s not always a political oppressions, there’s creative oppressions. So I’m crying freedom to make all the music I love, I’m crying freedom to love who i choose to love, and have the freedom to make my mistakes and be ok with them. People should have the freedom to do the same thing.

D: Talking about oppressions in all its ways, Chainsmoking has a strong meaning, and we can see it in the music video. There’s a man, dressed up as a police man beating up minorities. So, it definitely has a political meaning…

J: Yes, it does! It’s literally police brutality against minorities, with different forms: there was a Black man – me by the way –, the white guy was supposed to be gay, i don’t know if that came across, and a Muslim woman. The point of it is, me as a black guy, if I’m being racially stereotyped for some reasons, I’m not allowed to fight back. In the face of oppression, the one oppressed is always supposed to show grace. It’s like, me punching you and expecting you to be just like « Thank you » . And we have to do that everyday, because if you yell too much, they’d be like « Why are you being so agressive? ».
You can’t win, like I’m a black man, I’m really tall. When someone racially aggressed me… It happened to me in Los Angeles a long ago, someone called me a nigger. Two homeless people were arguing, I was walking pass them. And then, the man said « Not even that nigger over there coud help you ». As soon as I came up to him, he was like petrified. Everyone was like « Leave him alone » and I was like « Why the fuck should I live him alone?». That’s the thing! You’re not allowed to react, because if you do, you are the big black bully guy. Every time the oppressor oppresses, you’re always expect to show grace, and that’s what the video is about.

D: And what does represent the little white character on your wrist in the video?

J: That white character is called Nobody. It’s a whole collective I’m starting out. So, it’s the mark of people being oppressed for whatever reason: it can be the color of your skin, the veil on your head, your religion anything that breaks the norm of white supremacy. The story behind the logo is that inside of this white monster, there’s a little boy and this boy has a balloon. Every time this balloon is taking away from him, he becomes that monster. Back to my story: the balloon is my humanity. When I was walking to my car, he called me a nigger, he popped my balloon. Now I’m mad. If I get my balloon back, I’ll calm down. You can’t keep oppressing people and expect them to act calmly. For example, America has institutionalize racism. So most of the men in jails are Afro American. So, kids grow up away from their fathers. They learn how to live off the streets. So, they turn to a life of crime because they have limited opportunities, education is poor, they can’t get any jobs. Statically speaking a black man in America with no conviction is four time less likely to get a job than a white guy who has a conviction. So, these people aren’t left with much choices. So they turn to a life of crime because they can’t put food on the table. That’s what the sign represents. Nobody wants to protest. I don’t want to wake up on a Tuesday and be like « You know what? I feel like protesting today », we have to think about that. Why people think is their only way to be hear? We are all affecting by oppressions. We should fight together. There is more of us then there are of them, we can win easily

D: Why do you always release short album? Because this one is like five songs. We need more. It’s way too short…

J: My first album is coming but again I’m doing my album in EPs… Sorry for that [laughs]. My album is going to come in the form of three EPs in a space of a year. So, you get five songs at a time, every four months. I just feel like it’s a book of short stories, that’s how I see it. It’s going to come out as three chapters. The album is called Village and it’s based on the phrase « It takes a village to raise a child ».

D: When can we expect that?

J: The first chapter comes out in September, so I’ll be doing some of them on tour because by the time we start it out the Chapter I would be out. Chapter II will be out in January, and then chapter III in March. It won’t be a two year gap like it was before.

Jacob Banks will be at Pop-Up in Paris, October the 14th.