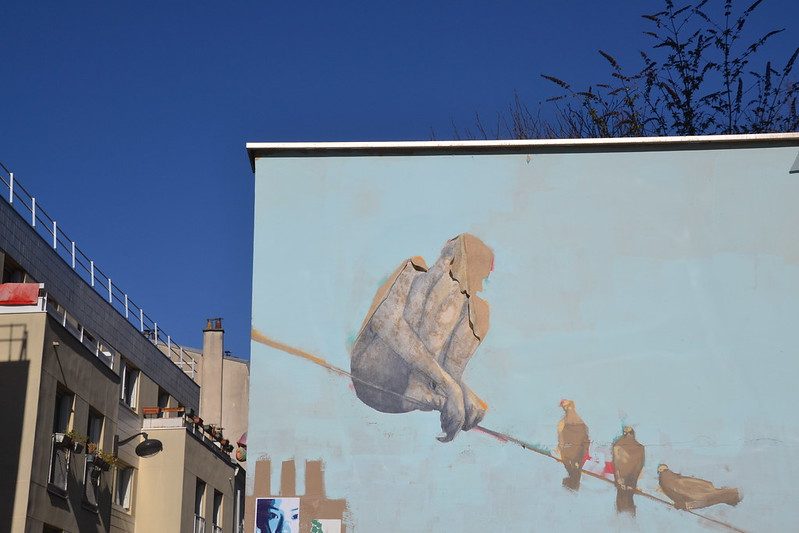 How are people supposed to experience, much more, create street art in a time when most of the world is allowed in the streets only for essential activity? Governments everywhere have ordered people to stay inside to prevent the spread of the novel Coronavirus. Street artists are innovating new means of keeping their art alive in times of isolation. For spectators, Google Arts & Culture found a way to bring the street to the viewer with their street art project.

The feminist activist group Collages Contre Les Féminicides (Collages Against Femicides), which denounces violence against women, did not cease operations when Paris mandated containment. Activists started collaging their windows for neighbors and those running essential errands to see. Those who can’t see the window collages in person can look at the group’s Instagram account, where they have also started posting virtual collages. The virtual collages appear on the sides of apartment buildings, metros, and next to the world-famous Mona Lisa in the Louvre. Even when we cannot march in the streets, activism does not stop!

Artist Felipe Pantone used IGTV on March 29th to showcase his graffiti skills, but this wasn’t your typical graffiti. Pantone, which coins his art style as Ultradynamism, used virtual reality (VR) equipment to spray-paint the side of a building while being inside his living room. The nearly 10-minute video shows Pantone using the VR equipment on the screen’s bottom half and the creation of his virtual masterpiece on the top half of the screen.

Timo Helgert is a German artist that has been reinventing cityscapes since before the eruption of COVID-19. In his series themed « the return of nature, » he creates surreal videos of overgrown subways and cities like Milan, New York, and Agra. The reimagined urban landscapes are viewable on his Instagram. Be sure to turn up the sound when viewing his posts to hear the birds sing and to be transported into nature as you’ve never experienced it before.

One of Google’s latest projects showcases street artists from all corners of the world. Here, you can take a virtual audio-guided tour through the painted streets of Malmo in Sweden, Buenos Aires in Argentina, or New York in the United States. You can also watch Stories in the making which allows you to go behind the scenes of the creative process with the muralists.

There is also an interactive map that shows the areas they have curated street art from so you can choose the country where you want to stroll the streets. Online galleries include LOVED ONES: MEXICO, Underground Paris, and many others.

Finally, curated just for the web there is a section called Street Art Made For the Web, which showcases murals that have been animated into gifs.