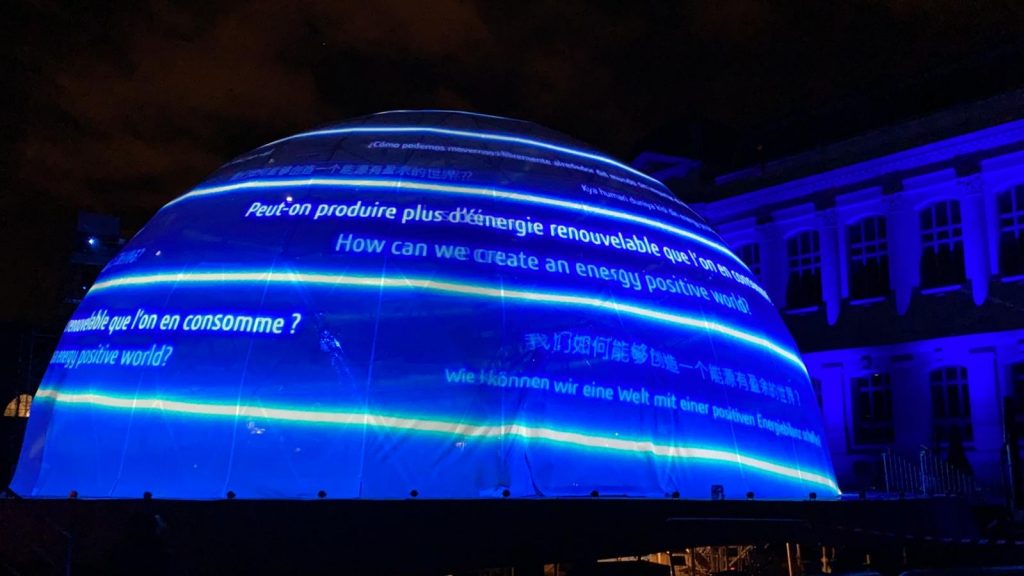 As the first act of a ten-part series by the French 3D design and software company, Dassault Systèmes, violinist Renaud Capuçon puts on a ravishing performance at the Jardin des Plantes in Paris. The “virtuoso violinist” is the centerpiece, accompanied by Les Siècles orchestra to deliver a performance that communicates intentions of “virtual harmony” for the future. Capuçon plays on a 3D printed violin, “3Dvarius,” the first of its kind created by Dassault Systèmes. The fusion of trailblazing technology and a striking musical performance makes for a distinctive first Act in the series. 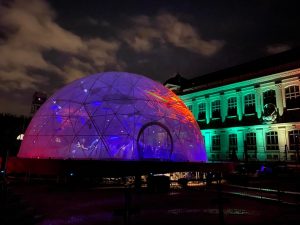 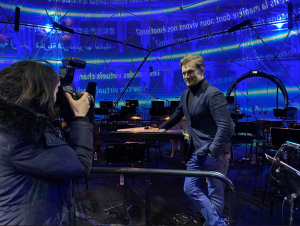 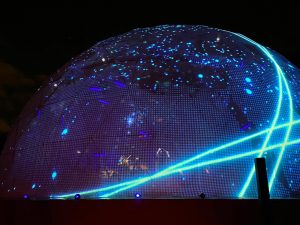 Left and right: the projection dome; Center: Renaud Capuçon getting his photo taken with the 3Dvarius

The performers sit situated in a large translucent dome on which projections of questions and colors are programmed to transition with each song. The audience sits facing the dome, allowing them to read the phrases and also watch Capuçon as he performs.

The opening question shown on the dome sets the intentions for the rest of the act:

“How can the virtual world change the way we experience emotions?”

The show that follows sets out to answer just that by showcasing Capuçon’s mastery of music as he plays on Dassault Systèmes’ 3D-printed violin. During the performance, projections of colors and abstract images flow over the globe that covers the musicians. A question regarding the role of technologies in creating and maintaining a sustainable tomorrow prefaces each song that plays, setting the tone for audience interpretation.

Through their senses, audiences are able to understand how human innovation in arts and technology is able to create profoundly emotional experiences and do so in a sustainable fashion.

Sometimes projected onto the dome are vivid splatters of all colors of the rainbow with the musicians performing an upbeat piece at the same time, bringing feelings of elation and hope. Other times the song is somber and accompanied by blue lines resembling shooting stars that slowly glide across the dome. In these moments, the audience is summoned to reflect, perhaps on the question prompted by the screen before the song begins.

The experimental production is a lot for the senses to take in. Nevertheless, it proves to be moving and inspiring with its ability to unify various domains. The questions it raises are thought-provoking, and the harmony amongst the different elements allows the audience the headspace to contemplate.

Dassault Systèmes’ intention for this particular performance is to empower the minds of the future by representing ways that technology can be used for expression. More broadly, the series entitled “10 Acts for a Better Future” focuses on a different societal concern with each act, ranging from topics such as “Energy” to that of “Heritage.” In highlighting these concerns, they also look for original solutions and encourage the audience to do the same. Dassault Systèmes believes that “The only progress is human,” which is their motive for creating these human-immersive acts.

Likewise, Vice Chairman and CEO, Bernard Charlès says that to reduce the environmental impacts of innovation, “First, you reduce waste, and, second, you make things right the first time.” With their capabilities of 3D printing technology, Dassault Systèmes attempts to display their ability to do both.

With sites set on creating an impression that impacts the generations to come, the first act on “Emotion” is one that stimulates your consciousness and summons you to look within to find solutions to the big questions that we face as a collective.

“And in this brave new paradigm, virtual will be the vital link between the imagination, the useful and the sustainable,” says Charlès, bringing more understanding to the purpose of the event.

Experience this new universe and beautiful live orchestra for yourself tonight, January 26th at the Jardin des Plantes in Paris. “Virtual Harmony” is open to the public. Doors open at 7:30 pm and the show begins at 8 pm, lasting a total of 50 minutes. The event will also be live-streamed from their website.