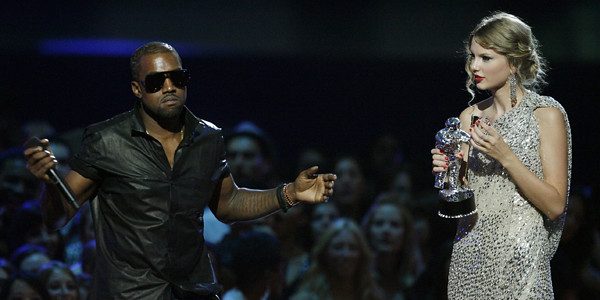 Self-quarantining isn’t easy, especially if you are following the news of the Coronavirus. Sometimes it’s nice to escape in some mindless celebrity drama, and lucky for us, the feud between country-pop star, Taylor Swift and rapper Kanye West and his wife Kim Kardashian, the beauty mogul, has resurfaced. Here’s the latest:

It all started at the 2009 MTV Music Awards; Kanye West snatched the microphone from Taylor Swift’s hands just as she was about to make her acceptance speech for Best Female Video. Then came the words from West’s mouth, “I’mma let you finish, but Beyoncé had one of the best videos of all time!”

Shortly after the song release, Taylor publicly condemned the lyrics, saying they were “misogynistic.”

Then Kim Kardashian entered the conflict to defend her husband’s name. Kim released clippings from a phone conversation between Taylor and Kanye, where Taylor appears to approve of the lyrics. Taylor denied that she approved the lyrics.

Nothing more came of the interaction until this Friday, March 20th. On Friday, an unknown person leaked the entire uncut phone conversation between the two stars. It seems that, based on the conversation, Kanye was asking Swift for a favor, not for approval. Kanye wanted Taylor to debut the song on her Twitter, which she declined.

Fans awaited the response of the two parties following the release of the full conversation. On the evening of March 23, Taylor posted an Instagram story. She said that instead of responding to requests to share her thoughts on the clips being leaked, that fans should “Swipe up” on her story to see what matters. When “swiping up,” Taylor’s fans were navigated to the “Feeding America” donation page, which allows people to donate money to provide meals to those in need.

Kim K. also begrudgingly took to Twitter that night, saying that this would be the last time she would speak on the drama involving Taylor. But before she said this, she Tweeted this earlier in the thread, and Taylor’s publicist responded:

I’m Taylor’s publicist and this is my UNEDITED original statement. Btw, when you take parts out, that’s editing.

P.S. who did you guys piss off to leak that video? ??? https://t.co/AtMGUp3t24 pic.twitter.com/EjGDwAdL6O