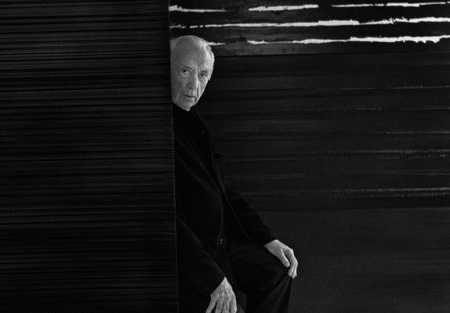 In honor of his 100th birthday in December, the abstract painter Pierre Soulages will become the latest living artist at the Louvre Museum. From December 11th to March 9th the exhibition will provide a retrospective of the many stages of his career.

Beginning on December 11th and continuing until March 9th, 2020 Pierre Soulages will have his work showcased in the prestigious Salone Carre room of the Louvre Museum, a room that the artist particularly enjoys because it displays Italian primitives, between the Apollo Gallery and Grand Gallery. Soulages believes that the primitive art illustrates « … the evolution of Western painting and the transition to a representation of three-dimensional space. »

This will be the first time Soulages has been invited to the Louvre for a solo show. The exhibition offers a retrospective of the artist ‘s career, consisting of  » a selection of major works, » from these past seven decades, coming from the biggest museums in France and abroad.  » The show explores the continuity of the artist’s work, as well as its various periods that reflect his ambition to bring out the light of the contrasts of black and white.

The exhibition comes just in time for the « painter of black and white » 100th birthday this December. Soulages was born in 1919 in the South of France and has since become one of France’s greatest living artists. The painter settled in Paris in the 50s following WWII where he was widely exhibited, however, it was not until an exhibition in the 70s that his name became synonymous with the color black.

In an exhibition at the Pompidou Center in 1979 Soulages debuted a painting called  » Outrenoir, » a French word that roughly translates to « beyond black. » Ever since then and reflect light. Known for being a perfectionist, Soulages paints in empty rooms with no distractions. To this day he claims to burn the canvases that do not satisfy him.